Cisco and Google have teamed up to offer hybrid cloud to Cisco’s enterprise customers, hoping to lure them onto the Google’s public cloud platform in preference to Amazon Web Services or Microsoft Azure. Analyst Zeus Kerravala described the plan as a “yellow brick road” to a preferred implementation of hybrid cloud.

Google services, including the Google Container Engine based on the open source Kubernetes system, will let customers manage workloads and move them between on-premises data centers and Google Cloud, using the same tools in both environments. The offering will be available to some customers early in 2018, and more widely in the second half of the year.

The companies have not stated the financial terms of the deal - and it is not exclusive, so both can seek other partners. The deal will see customers buying a combination of Cisco hardware and software, along with pay-as-you-go services from Google. Cisco’s staff and partners will support Google Cloud services alongside the Cisco products. 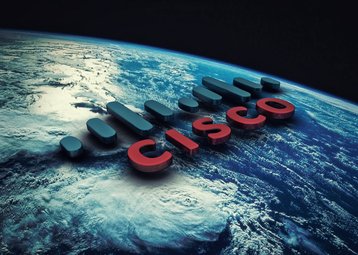 “Lots of companies partner, but these two have actually built something together,” commented analyst Zeus Kerravala, of ZK Research. “They’ve put a lot of work into this.”

The move should help users with a complex set of issues, he said: “There are not many best practices, as there are so many options - but Cisco and Google will offer a single set of policies. Application developers can build once and deploy on-premises or in the cloud.”

The deal will be compared with VMware’s relationship with the AWS cloud, which also creates a hybrid cloud from public cloud and on-premises solutions, however, Kerrala believes the Google/Cisco deal goes further.

“VMware has extended its hypervisor into the Amazon cloud,  which has value,” he told DCD. ”What Google and Cisco are doing here is a little bit broader: it includes security and other features.”

The joint offering will mostly be sold by Cisco, said Kerravala: “Cisco has a sales force and a channel, and they understand the enterprise buyer.”

It has long been predicted that enterprise IT will migrate to the public cloud, but there have been large barriers to moving resources out of on-premises sites, and hybrid cloud has been proposed as a medium- to long-term solution.

Cloud has become a “strategic imperative for people,” Google’s cloud head Diane Greene told CNBC: “But it just can’t happen that fast. It’s a lot to take all your on-premise data centers to the cloud and not everything will necessarily move.”

Google’s cloud offering is trailing behind AWS and Microsoft’s Azure in the enterprise, despite recent signs it is growing more quickly,  This deal marks Google’s first attempt to join forces with a major on-premises IT vendor, and is a bid to steal a march on AWS and Azure.

“For Google this is important,” said Kerravala. “It could put them on the map.” He believes Google’s failure in the enterprise may just be a problem in focusing on something which - to Google - is a niche: ”They generate so much money with search and advertizing, the enterprise business is a rounding error.” Despite this, Google clearly wants to succeed in that sector: ”They hired Diane Greene [from VMware] to drive their enterprise business, and that is a step in the right direction.”

For its part, Cisco has suffered falling revenues, thanks to slower sales of its core network switch products. The company’s UCS converged hardware, which combines network switches, and servers, has done well, and in 2016 was upgraded under the HyperFlex brand, to include software-defined storage from Cisco acquisition SpringPath.

The rise of the public cloud is a threat to this on-premises hardware business. Cisco attempted to offer a public cloud solution, but the InterCloud service failed in the market, and was finally killed off earlier this year. The lack of a long-term hybrid cloud strategy would make HyperFlex and UCS less attractive to customers.

“We’ve listened to our customers,” CEO Chuck Robbins told CNBC. “They’re looking for cloud speed and scale and agility, but they want the flexibility of running applications in private data centers as well as in public clouds.”

As well as the Kubernetes container management technology, which Google created and open sourced, the deal will include Cisco networking and security tools, as well as Istio, a micro-services authentication system developed by IBM, Google and ride hailing application Lyft. It also includes Google’s Apigee API management service, which will let on-premises workloads connect to the public cloud.

The deal isn’t exclusive, and Cisco could sign deals with other cloud providers. Kerravala expects to see that happen, with Azure and maybe VMware: “Cisco espouses the vision of hybrid multicloud.” 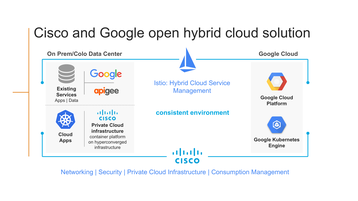 Kip Compton, vice president of cloud platform and solutions at Cisco, agreed, in a blog post: ”While hybrid is here to stay, that’s not to say that it’s easy. There are significant differences between public and private clouds, and it’s hard to write applications that can move easily between these environments, let alone provide a consistent experience for developers. We have seen a natural distribution of existing applications, some that belong on-premises, and some that belong in public cloud. The challenge - and the magic - is in getting those applications to all work together.”

A blog by Google’s head of global technology partners Nan Boden says: ”Our work with Cisco enables app developers to build modern services that scale and can extend their customer reach while consuming data locked in existing systems that have not yet made the move to the cloud. This approach helps enterprises get up and running in the cloud at their own pace while preserving the value in their existing on-premises investments.”

The deal will see Google involved in selling Cisco hardware licensed software alongside its pay-as-you-go cloud: the software components from Cisco will be licensed on a subscription basis for one, three or five years, and the hardware will be sold outright.

How to choose a cloud provider

If you are wondering how to choose a cloud provider, here is a wise flowchart from cartoonist Roelbob which should be some help.