Despite everything, a successful year (for data centers)

This year has been a good one for data centers, but here’s hoping we never have another like it

If, many thousands of years from now, historians picking through the rubble of a long lost civilization tried to piece together the year 2020 from data center industry figures they would find something remarkable.

Poring over charts of growth and expansion, they would assume that this year was one of prosperity and good fortune. They would simply not see the depressing roller coaster that is 2020, ever lurching from disaster to disaster.

Data centers’ integral role as the fabric of digital society has meant that they were spared from most of the harm that 2020 has wrought. For many in the industry, the world’s rush online has even meant business is booming.

“The move to digital business, migration to hybrid cloud, and network optimization - all of those things have been accelerated,” Equinix UK head Russell Poole told DCD.

In its annual report on global traffic trends, the company found that interconnection was growing at a compound annual growth rate of 45 percent. “I don't think Covid caused anything new to be happening, there's just more going on.”

While there have been some customers in industries that have struggled, the overall trend has been for businesses to require more space - be it in colocation data centers, or through the cloud. “Even companies that are not doing so well are looking to take cost out of their supply chain, and I think digitizing is a way of doing that,” Poole said. 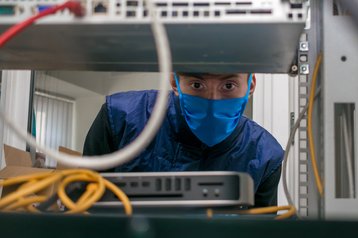 On tangible supply chains, data centers were also caught up in the early worries of equipment being delayed when coming from China. But, despite an uptick in demand for networking equipment, this did not cause serious issues for the data center industry, with many operators having stock on hand.

Equally, while Facebook was among a few data center operators to pause construction during the onset of the crisis, most carried on. “Because of the critical nature of what we do, our contractors were able to carry on,” Poole said. “They had to change working practices to make it safer, and in some cases that made things take longer. But we haven't seen any substantial delays to any of our projects.”

In its latest earnings report, Equinix's CFO Keith Taylor admitted that there were some costs to the crisis - with some customers going out of business, and others seeking discounts, Taylor believes Equinix took a $20m-30m hit.

Overall, though, the growth more than made up for the losses - with Equinix raising its revenue guidance to just under $6bn for the year.

The company is far from alone, with the industry broadly seeing revenues rise as businesses shift to digital - with the exception being smaller providers that have significant exposure to industries hit hard by Covid.

Another struggle for some has been winning lucrative hyperscale contracts, which can bring in huge revenue hauls - but are often an all or nothing proposition.

"We have talked about the lumpiness of the hyperscale business and how the timing of these larger deals can impact bookings from quarter to quarter," CyrusOne CEO Bruce Duncan said in an earnings call presenting "disappointing" leasing results.

The company, which was struggling and underwent layoffs before the virus hit, has pinned its hopes of a turnaround on winning a slew of hyperscale contracts in the years ahead. "We are going to be very focused on closing the valuation gap between us and our very good competitors," Duncan admitted.

In a year of accelerating trends, that of an industry ever beholden to hyperscale business was among the most rapid advances. For the first half of 2020, hyperscale cloud ecosystem revenues were up by 20 percent to an enormous $187 billion, Synergy Research found.

“Cloud technologies and services continue to disrupt the market and to open up new opportunities for operators, technology vendors, and corporate end users,” Synergy chief analyst John Dinsdale said. “Amazon and Microsoft may be the poster children for this movement, but many others are benefitting too and most have seen relatively few negative impacts from the pandemic.”

In this issue, we talk to Microsoft about its underwater adventures with Project Natick

Of course, with cloud providers building their own huge data centers and related networks of infrastructure, their relationship with the wider data center industry has always been an uneasy one. They both serve as wholesale providers’ main customers, and as competitors to the concept of hosting the Internet across a plethora of providers.

But Equinix’s Poole believes that the balance will stay in the providers’ favor for the foreseeable future - “hyperscaler consumption of data center capacity that they don't own is growing - look at the performance of the operators out there who focus solely on that,” he said.

“And when we look at the demand that we currently see and expect to continue to see, the hyperscalers will build their own data centers, but the scale of their growth and their low latency requirements mean that they are likely to continue using third-party operators.”

It’s a bet Equinix has made with the launch of its xScale business, focusing on wholesale business to hyperscalers - although its traditional colocation and interconnection efforts also bring in significant revenue from the cloud giants.

The company hopes to place itself as the intermediary between the cloud providers, with its Equinix Cloud Exchange Fabric serving as a crucial (and lucrative) link in a multi-cloud world. This last quarter, it passed an annualized run rate of $100m.

This, and the general success of the industry in 2020, is clearly a positive note to help make the year a little more bearable. But we are not automatons who solely derive pleasure from steady share price increases, nor are we future historians reading ancient traffic trends. In the symphony of terror that has been this year, we’ve been humans.

The lack of major disruptions to supply chains, construction timelines, or Internet connectivity has come at the expense of an incredible joint effort by those in the industry. The rush to digitization has meant transitions that used to take months were pulled off in weeks.

While they were mostly shielded from the same job security anxiety as other industries, data center staff have had to face the same stresses as everyone else - the constant fear of the virus impacting themselves or their loved ones, the decline of democracies, the rise in police brutality, the growth of climate-related disasters, and the gnawing feeling something else is going to happen. Together, we have all had to endure lockdowns, and the shared weight of so much tragedy.

With that in mind, employees’ mental health has to be a focus of any company, including those in the data center field, Poole said. “We've been encouraging people to take time out,” he said. “One of the things we found was people stopped using their holiday allowance. We were just working, working, working. So as senior leaders, we have been very publicly taking time off and being properly out of office.”

The company instituted a policy of two extra mandatory days off, worldwide, around Mental Health Day (with the exception of critical facility staff, who were given days in lieu). "The whole company had two days off - 10,000 people - we had a company-wide shutdown."

While the company is built around 24/7 operations, human employees aren't. "All of the data center managers are being encouraged to make sure that their teams take time out and properly just go away and disconnect."

While it’s unclear how much longer the pandemic will rage, or what other disasters the future may hold, caring for employee mental health will be a mission-critical task for data center operators to maintain.