Hyperscalers are on the rise with breakneck growth in APAC

Hyperscale data centers are on the rise in the Asia Pacific (APAC), which is expected to be the largest contributor to the global demand for bigger and faster IT infrastructure.

With a projected compound annual growth rate of 13 percent, APAC could eventually surpass the United States and European market, according to Darren Hawkins, president of data center design and management startup Polymer Connected. 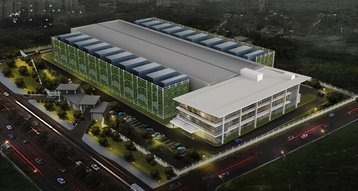 A data center veteran with more than 30 years of experience in construction and IT, Hawkins attributed demand for hyperscale data centers here to changing consumer behaviors and the rise of converged infrastructure.

“You used to go to the bank once a week to pay your bills. Now you have e-banking, where you pay them online, which ironically creates a lot of smaller transactions. From a single visit to the bank to 20 or even a 100 transactions per month, from the same consumer, with the same value. People are logging in more often; and this data must be kept for seven years,” explained Hawkins.

“[Consumers] today are taking thousands of photos with their smartphones. These multi-megabyte files are backed up on the cloud, shared on social media platforms such as Instagram, and sent to their friends on messaging apps. More data is being generated than ever, and all these get saved in the cloud for a long time.”

In addition, heightened demand in fast-growing economies such as Indonesia is also prompting a shift by enterprises to converged or hyperconverged hardware. These are appliances where compute, storage and networking are crammed into a hardware appliance. With everything managed in software, these deployments are easily scaled with the addition of more nodes.

The downside? Converged and hyperconverged deployments are much more power-hungry and scale linearly as more nodes are added, compared to traditional IT systems which are a mix of low-powered and high-powered devices. This characteristic makes a hyperscale data center’s ability to support 6-8kW per rack across the entire data center a seeming godsend for the former.

“I think hyperscale facilities is a gift to hyperconverged developers. Previously, it was really hard work when you needed to deploy 500kW to 1MW. But now, you can do it in 12 weeks in hyperscale data centers in Sydney and Melbourne. It gives hyperconverged deployments the flexibility to quickly move with the market. Procurement times are going down,” said Hawkins.

In Singapore, Digital Realty announced a 50MW hyperscale facility - its third here - earlier this year, while hyperscale specialist AirTrunk in April announced a 60MW data center for its maiden facility in the nation state. A 30MW facility by ST Telemedia Global Data Centres (STT GDC) is scheduled for completion in mid-2020, while Global Switch’s 30MVA data center opened in March.

Elsewhere, Princeton Digital Group (PDG) just last week announced the building of a hyperscale facility in Indonesia as part of its joint venture with Indonesian telecommunications operator XL Axiata. In Thailand, STT GDC and FPT have also announced a joint venture to build a hyperscale data center in Thailand.

But while the fundamentals of building hyperscale facilities in tropical climates are not that much different from that of a traditional data center, ensuring that they operate at peak efficiency is a different ball game entirely. Humidity is one challenge, and data center operators must be careful about condensation in ducts as this can result in runaway mold growth that can create problems in the long term, says Hawkins.

One strategy he has seen data centers operators employ is the installation of external shields over the top of the buildings to reduce the amount of direct sunlight hitting the building – and contributing to the data center’s thermal footprint. Hawkins concedes that this measure is probably more impactful in older facilities than modern ones, and that effective strategies for modern hyperscale data centers are more limited.

“If you’re going to take power off the grid in an industrial estate, that’s going to be challenging. You can buy offsets, though that’s not improving the efficiency of the facility itself. It is reducing the perceived emission. It may be a ‘green’ PUE of 1.5, but that not better than a PUE of 1.5,” he said.

One option would be to simply run the data center hotter, though you probably won’t see it happening tomorrow: “[Running equipment hotter is] probably going to be the biggest area of breakthrough; I’ve heard of some people experimenting with running their equipment at 60 degrees Celsius.”

Hawkins did offer a word of caution about potential unintended side effects from setting the thermostat so high. “When racks went to 6kW and they were still using copper cables and standard sheaths for power cables, the plastic melted off. And at 8kW per rack, I’ve heard of policies where you are not allowed to stay in the hot aisle more than 30 minutes,” he said.

“Our approach is to drive PUE to 1.5. We do think you can get PUE that is comparable with cities like Melbourne and Sydney in Southeast Asia. But you have to do it in a different way. You must fundamentally think about how you are getting power, and what form it looks like. And how can I use the energy in an economical way to help with cooling.”

“It would have been tweaked, amended, adjusted to improve performance. As a data center beds itself in, and staff learns to use the equipment, better manage the ducts, flow rates for cooling, it will get better.”

Ultimately, Hawkins believes that hyperscale data centers in Asia must be designed and built specifically for the region. There are important nuances that ranges from the way external plants are installed depending on the environmental conditions, to the increased complexity inherent to the multi-story facilities found in cities such as Singapore and Hong Kong.

“Asia needs to make its own data center norms, not follow other norms. I think you cannot take designs and repeat them from other parts of the world. You have to challenge everything,” he summed up.

“It’s a big region, with a lot of people. And it’s going to be the biggest data center consumer in the world if rates of growth go on as predicted, potentially overtaking the United States and Europe. It makes sense to have its own conventions that work for the climates here.”