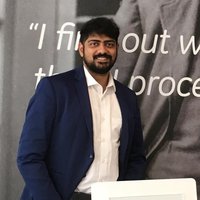 Srikanth Rangarajan is a research professor in the Department of Mechanical Engineering. He joined Binghamton University in 2018 as a post-doctoral research associate with Prof. Bahgat Sammakia. He earned his BE in mechanical engineering (2007-2011) from Sri Sairam Engineering College affiliated under Anna University. He began his career as Graduate Engineering Trainee at Wabco India (2011-2012). He joined the master’s program (MS) in thermal engineering at IIT Madras (2012). He then upgraded to doctoral studies at IIT Madras in 2013, in heat transfer, specifically in the thermal management and optimization of phase change material based heat sinks under the guidance of Prof. C. Balaji.

Rangarajan is the inventor of the rotatable heat sink, with a recent patent awarded by the government of India. He has 12 papers published in international journals. He has also presented 6 papers in international conferences. He has authored a book titled “Phase Change Material-Based Heat Sinks – A Multi-Objective Perspective,” His recent research work includes liquid cooling in data centers, three-dimensional integrated circuits, and associated optimization.