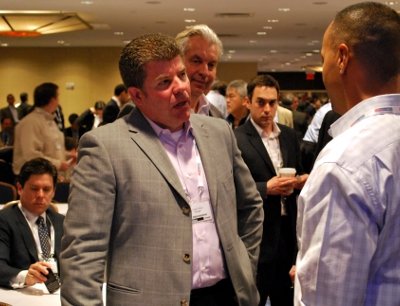 Google has one of the largest but also one of the greenest data center infrastructures among the world’s companies. While it’s easy to brush this fact off by saying Google can do it because it has the resources and the scale that’s necessary, it does not mean smaller companies are powerless to make a meaningful dent in the industry’s impact on the environment.

This is according to Joe Kava, senior director of data centers at Google. During his keynote address at the DatacenterDynamics conference in New York City Tuesday, Kava called on the data center industry to band together to make wholesale changes to the way its energy use is affecting the planet.

He said this in the context of a presentation about Google’s approach to stimulating more sustainable energy sources to contribute to the overall energy supply. “If we can increase [clean-energy] content on that local grid, then we by extension are greening our data centers.” he said.

Google’s method to “green” the grid is called Power Purchase Agreements. The company guarantees a renewable-energy developer that it will buy 100% of their future project – such as a wind farm – for 20 years. Google has to buy the energy from the local grid that feeds power to one of its data centers.

This way, the developer has assurance that their project will not lose money and realizes its full value because Google also buys green-energy credits attached to the energy they commit to buying from the developer.

Green-power purchases are only one element of Google’s strategy to run a 100% “carbon free” data center infrastructure. Google has been completely carbon-neutral since 2007, Kava said. The other two main elements of the strategy are energy efficiency and carbon offsets.

A large scale power-purchase agreement is obviously an expensive endeavor only the likes of Google can afford. With a syndicate of companies entering such a power purchase agreement, this becomes a reality for smaller players, Kava said.

Today, clean energy is more expensive than traditional coal- or gas-generated energy. Google admits that its system results in some net loss. Kava, however, says this reality is not going to remain.

“I’m betting that [traditional] energy prices are going to go up,” he said. “In time … this is going to be a wise business decision as well as a wise environmental decision.”