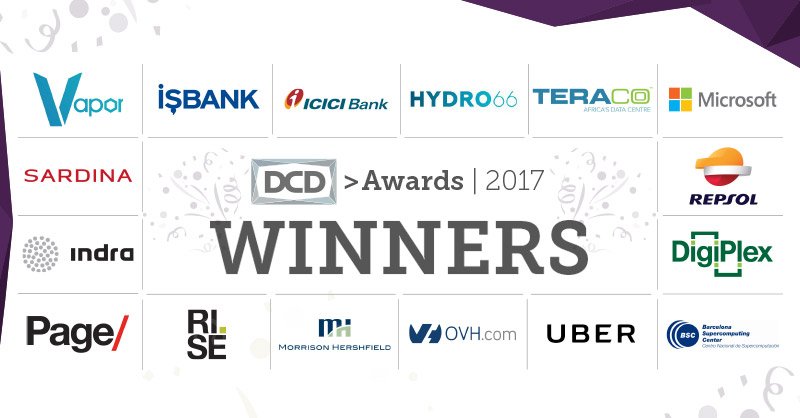 DCD has today announced the winners of the first global edition of the DCD Awards, recognizing excellence in the data center industry.

The very best of the industry have been recognized with Awards presented at a gala dinner in London’s Royal Lancaster Hotel tonight. The worthy winners were selected from hundreds of applications from around the world, by an independent panel of judges - with one category, the Beautiful Data Center, determined by a popular vote.

MareNostrum is the name of the main supercomputer in the Barcelona Supercomputing Center (BSC). It is the most powerful supercomputer in Spain and is housed in the most stunning location - The 19th Century Chapel Torre Girona in Barcelona, which has been operational since 2005, demonstrating that beauty doesn’t age.

Project Volutus is Vapor.io’s proof of concept in Austin,Texas. It puts one of Vapor.io’s unique cylindrical designs inside a cell tower, to offer services using a retail colocation model. It is ready to roll out in multiple cities across the USA

Isbank has dedicated 800,000 man-hours to this state-of-the art 38,500 sq m data center in Istanbul completed in June 2017. It is the first Uptime Institute Tier IV constructed facility in Turkey

Hydro66 is led and financed by Internet industry veteran David Rowe, founder and CEO of Easynet. Its first data centre is located in the leading cloud and data center cluster in the Nordics and is powered using locally generated clean green hydropower

Teraco is a vendor neutral data center operator in South Africa making energy efficiency one of its highest priorities. Working closely with Stulz on upgrading their Isando Data Centre 7 in Johannesburg they managed to achieve PUE values of up to 1.1 in a very challenging climate

Microsoft’s ‘Stark and Simple’ design collapses the entire energy supply chain, into a small fuel cell at the top of each rack. The result is a very efficient generator that produces electricity and by-products that can be reused; like clean water, high grade heat, and pure CO2

FishOS is an energy-optimizing and utilization-improving automation system for OpenStack clouds. It addresses the full lifecycle automation requirements of OpenStack, encompassing deployment, operation and upgrade phases. It contains OpenStack software and has been validated to provide API compatibility for OpenStack core services

Ulven was the oldest and worst energy performing of all DigiPlex’s data centres. In summer 2016, a team was convened to improve the facility’s performance, whose work resulted in annual energy cost savings of £400,000 for a capital outlay of £1.2million

RagingWire selected Page to partner on the design of a new 1 million sq ft TX-1 campus in Garland, Texas. Whilst the client has traditionally used in-house design and construction personnel, this unique hybrid integrated project delivery model was developed to work at scale which improved design, quality, speed-to-market, and saved costs

RISE SICS is a leading research institute for applied information and communication technology in Sweden, founded in 1985. Its new ICE research data center supports universities and industrial companies with an experimental environment for cloud and infrastructure technology.

Many say that one’s problem solving isn’t best tested until ‘the “proverbial” hits the fan’. When Superstorm Sandy hit New York, a disaster that had epic repercussions for the local data center market, Shea was on call and selflessly braved a flooded home and the chaos of an unprecedented natural disaster to serve his local client.

Business Leader of the Year
Sponsored by DigiPlex
Winner: Octave Klaba of OVH

Octave Klaba is founder and CEO of OVH, a European cloud  provider specializing in open technologies. In particular OVH has spearheaded the use of services based on the OpenStack open source cloud platform. OVH also picked up the VMware’s public cloud, vCloud Air, when VMware tired of it. After all, you should always have options!

As well as founding the Infrastructure Masons group of distinguished data center engineers, Dean built data centers for organizations including eBay. He is now Head of Uber Compute