Built out of Nvidia DGX SuperPODs

French IT giant Atos has signed a four-year contract worth £5 million ($6.5m) with the University of Oxford to deliver a supercomputer for artificial intelligence workloads.

The system will be built on the Nvidia DGX SuperPOD reference architecture and feature more than 500 Nvidia GPUs.

The JADE2 supercomputer is expected to be the UK's most powerful AI system.

GPUs remain at the heart of AI workloads 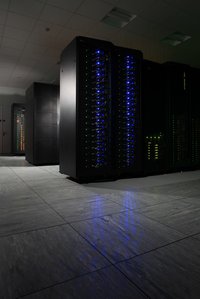 The first Joint Academic Data science Endeavour (JADE) is led by the University of Oxford, with support from the Alan Turing Institute (ATI), and 22 universities. It runs a national GPU system supporting multidisciplinary science with a focus on machine learning and molecular dynamics.

JADE2 will more than triple the capacity of the original machine. It will feature a cluster of 63 DGX1 nodes, with 504 Nvidia V100 Tensor Core GPUs, interconnected with Mellanox InfiniBand networking, all being fed by DDN’s AI400 storage. Nvidia previously built a supercomputer for itself out of DGX2 nodes, with 'Selene' thought to be the seventh most powerful system in the world - packing 2,240 A100 GPUs together.

“The successful delivery of JADE has created more demand among UK researchers and industry for powerful computing facilities which can accommodate high end, data-intensive AI workloads," Professor Wes Armour at the University of Oxford said.

"Building on the success of the JADE collaboration with Atos, and by significantly expanding the JADE consortium’s computing capacity, the new Deep Learning supercomputer supplied by Atos will allow us to meet this demand and help many institutions to make some potentially ground-breaking discoveries. It will cement JADE’s status as the de facto national computing facility for academic AI research.”

The system itself will be run out of the Science and Technology Facilities Council's Hartree Centre in Daresbury. "We are pleased that the delivery and hosting of this cutting-edge JADE-2 hardware and the resultant increase in capability will support the development and expansion of research computing skills across industry and academia," Hartree's director Alison Kennedy said.